Vermintide—or, to use its Fully Licensed Intellectual Property name, Warhammer: End Times – Vermintide—is a co-op shooter that borrows heavily from Valve’s Left 4 Dead series. It borrows so heavily it feels larcenous, really, but damned if it isn’t a great homage. And if you’re tired of zombies, well, here we have rats.

In the world of Vermintide, the end times are extremely nigh. A tide of angry ratlings, the Skaven, have risen up to swallow the realms of men. In the city of Ubersreik, a plucky band of mismatched heroes fights the vermin menace. From their base of operations, the team ventures out into the city’s filthy streets to save the world from a ratty apocalypse.

Vermintide is in many ways Left 4 Dead with a Warhammer skin. Characters yell out the locations of ammunition dumps and bandages, cry out when a rush of Skaven is on the way, and beg for help when they’re injured. Some missions involve gathering barrels of fuel and depositing them in a getaway vehicle. You know that swoopy camera move that pans over every Left 4 Dead stage, then zooms into the back of your character’s head? Vermintide does that, too. Frankly, I wouldn’t be surprised to learn that Dwarven Ranger Bardin Goreksson hates stairs, trains, and lawyers.

And while I do wish that it took more risks in departing from the proven Left 4 Dead formula, the work done here to create an exciting co-op adventure is top-notch. Vermintide is one of the best co-op games since Left 4 Dead 2, and its focus on melee combat, gear upgrades, and a fantastical setting give it its own wonderful, beady-eyed character. 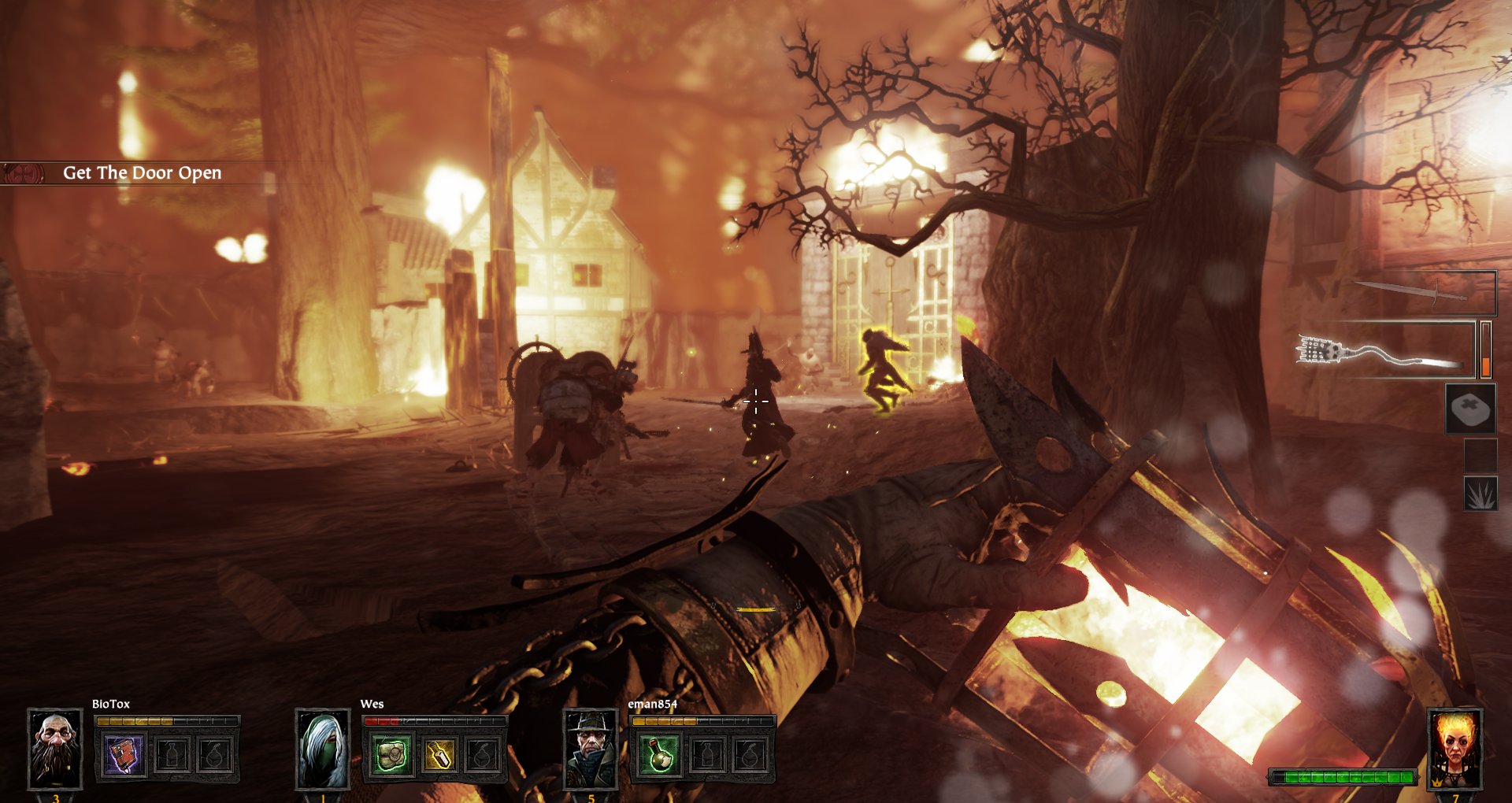 While Left 4 Dead certainly provided the bones, the meat makes Vermintide its own experience. Five distinct characters battle Skaven, each with their own strengths, equipment, and playstyles. Between missions, players choose gear sets that change how characters play. Weapon classes have different characteristics, but individual weapons have special abilities or damage boosts. Getting a sword and shield combo can give a new player the ability to play the role of party tank. Getting a new, more powerful warhammer can be cause for celebration, an excuse to load up the first level and try it out right away.

I have some concerns about how deep this economy goes and its limitations. For example, I have no idea how many individual items might be in the game, or if more might be introduced on a regular schedule. All weapons in the game are locked to individual characters, so it can be frustrating to earn a really rare piece of gear for a character I don’t play. For now, though, the weapons are varied enough to keep me coming back, but a lack of updates might harm Vermintide’s prospects for longevity.

In addition to having different gear, the five heroes play in very different ways. The Elf Waywatcher is an expert at saving allies from special Skaven with a long-range headshot. The Dwarf shoves Skaven with his shield: an essential crowd control tactic. The mage, a fire-slinging sorcerer named Sienna, gradually overheats from her pyrotechnic magic and has a chance of detonating, taking out a crowd of rats in the process. Each is different, and they feel great to play. I love being forced to adapt my strategy based on who I’m playing as, and no one feels underpowered or boring.

As a team, the characters are forced to work together in a tight group by the danger of being alone. It’s easy to get surrounded or overwhelmed by a pack of Skaven, and only a friend can revive you. The drive to stay together is so powerful, it can prompt some action-movie heroics: Once, a pack of angry Skaven surrounded me, separating me from my friends. My Empire Soldier can deal out some damage, but if I get caught and hung up by a Pack Master without help, I’ll be rat food. I sent one half of the Skaven circle sprawling with an almighty shove. Running toward the falling ratkin, I turned around and swept my hammer across six more, flinging two of them face-first into a stone wall. My hastily drawn shotgun blew another group of Skaven into a furry mist, and I ran back to the safety of the group. 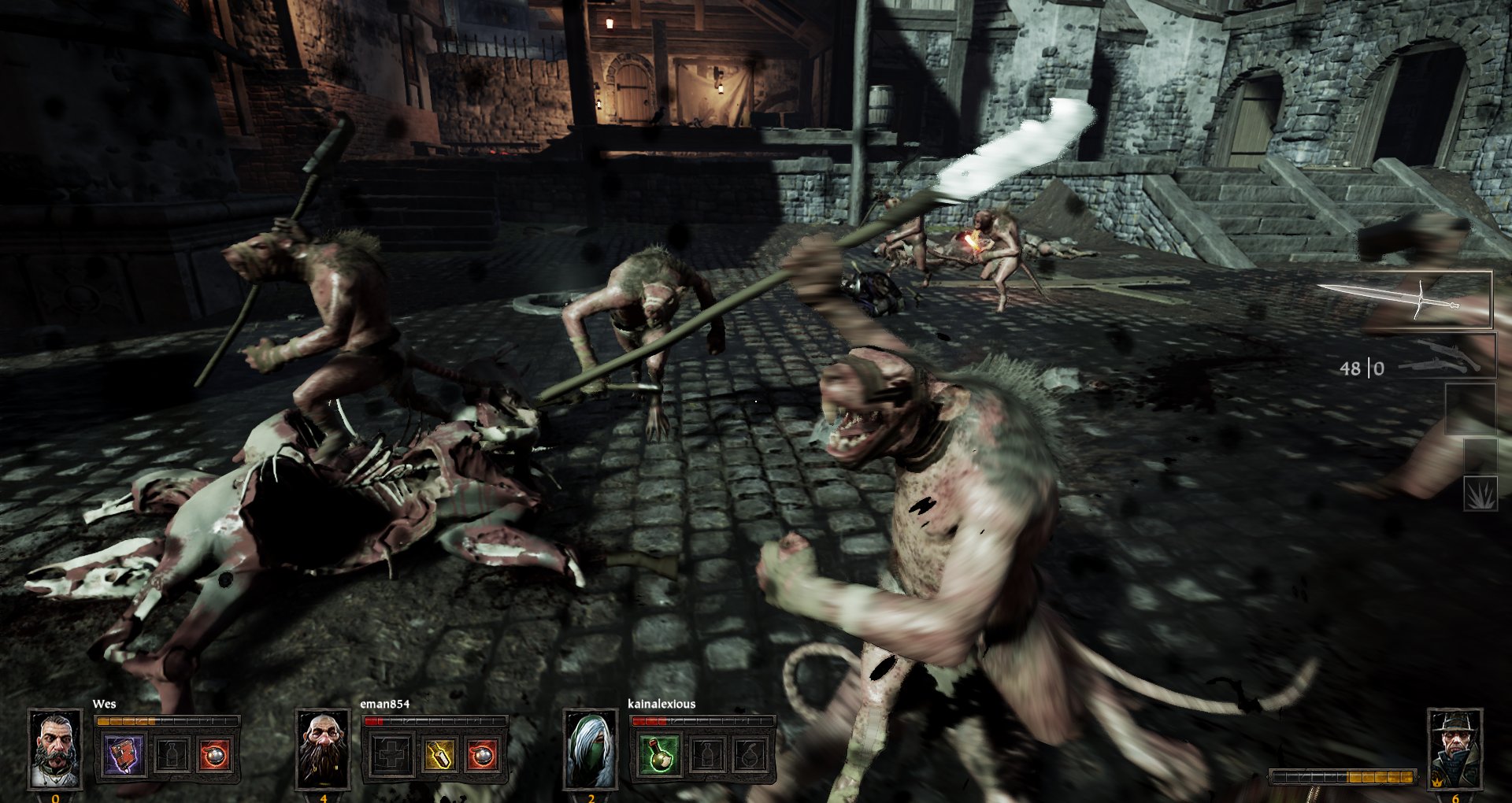 Developer Fatshark’s previous games, War of the Roses and War of the Vikings, lived and died on the strength of their melee combat systems, and Vermintide’s combat shines with the polish of expertise. Every character has a ranged weapon of some kind, but limited ammo stocks force ballistics to the background.

The melee system isn’t as deep as Fatshark’s earlier games. Controlling angle or direction doesn’t change a swipe into a stab—Vermintide’s heroes more simply attack, charge up a special attack, block, and shove. Amazingly, this system’s simplicity helps sell the power and solidity of the combat. Great sound design does a lot of the heavy lifting here: the sound of warhammers popping skulls and swords slicing fur builds the brutality.

Vermintide is also a beautiful game—or, at least, a beautiful rendition of a town hip-deep in rat shit. While levels set in the sewers or the marketplace felt samey and dull, like taking a third lap around an uninspired renaissance fair, others are extraordinary visual achievements. In the first level, my entire team stopped to stare across the rooftops of Ubersreik bathed in the light of a full moon. Later, the magic in a mage’s tower twisted the architecture inside until doorways inexplicably led to upside-down ceilings, and ratkin poured up horizontal stairways set into the walls. This sense of place, the flavor of fantasy and magic, does a lot to separate Vermintide from Left 4 Dead’s suburbia-and-malls setting.

I did see a few graphics bugs here and there, but it overall ran very smoothly. On my GTX 970, I saw great framerates in the 60s and 70s at the highest quality settings. During heavy assaults by huge packs, framerates dipped into the mid-40s without any screen tearing or other artifacts.

Absolutely every bad guy in the game is a joy to conquer, run from, and kill.

The only thing that truly disappoints me about Vermintide is the Skaven themselves. As a group, they’re a fine replacement for Left 4 Dead’s wobbling zombie hoards. As individuals, though, the special ratkin are a paper-thin gloss over L4D’s special infected, and this galls me. Clan Moulder’s genetic monstrosities, the Rat Ogres, have lost their prosthetic sword-arms and multiple heads and been watered down until they’re just furry, large-toothed versions of the zombie Tank. The Pack Master, whose sole job in Warhammer lore is to keep Rat Ogres from killing their own allies, instead skulks around alone looking for heroes to drag away: the ratkin version of the zombie Smoker.

This is the area of the game where constant homage to Left 4 Dead becomes distracting instead of charming. Other special Skaven, like Clan Skryre’s famous Ratling Gun or marching patrols of black-furred Stormvermin, break from pre-established patterns and show off Warhammer lore in interesting ways. I wish that, in this aspect, Fatshark had gotten more distance from their inspirational material.

On some creative level, it offends me that Fatshark copied even minor, inconsequential design choices from Left 4 Dead. However, my quibbles with the application of Warhammer lore and Fatshark’s adherence to Valve’s formula are separate from my love of fighting these vicious critters: absolutely every bad guy in the game is a joy to conquer, run from, and kill. Playing with friends frequently devolves into swearing and laughter. Heroic comebacks against unbelievable odds, and acts of great sacrifice, are commonplace. There’s a quiet glow of satisfaction when tight teamwork wins the day. These are the hallmarks of a great game built for amazing co-op experiences.

Vermintide is smart, chaotic, and beautiful. It’s a game that has gotten me hooked on Warhammer Fantasy fiction in a way I wasn’t before. It’s difficult, bloody, and it’s my favorite co-op game to come along in years. 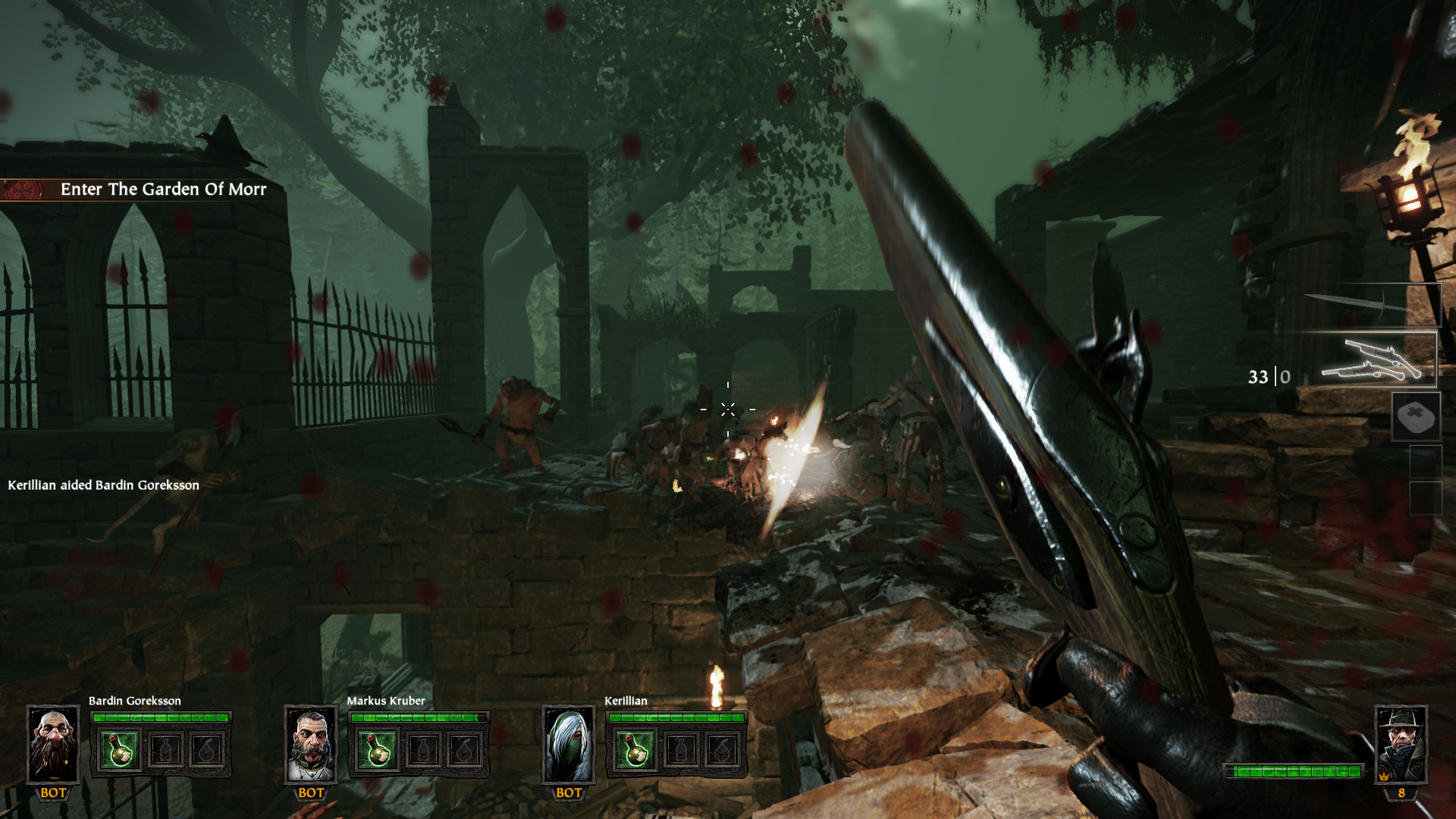 Verticality and open space give you a good angle for a blackpowder headshot. 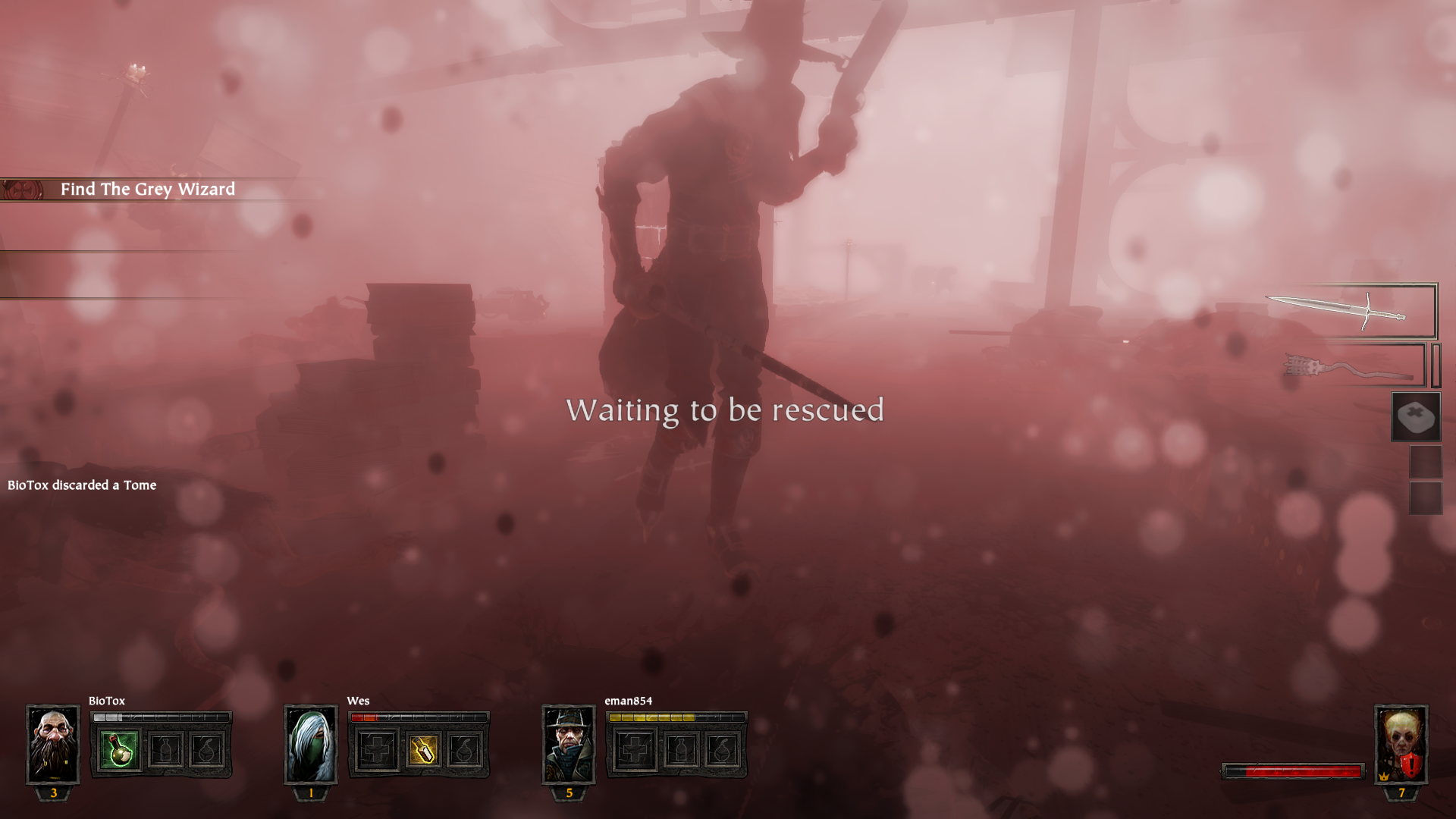 I’m down. I’m bleeding out. And then—a savior. 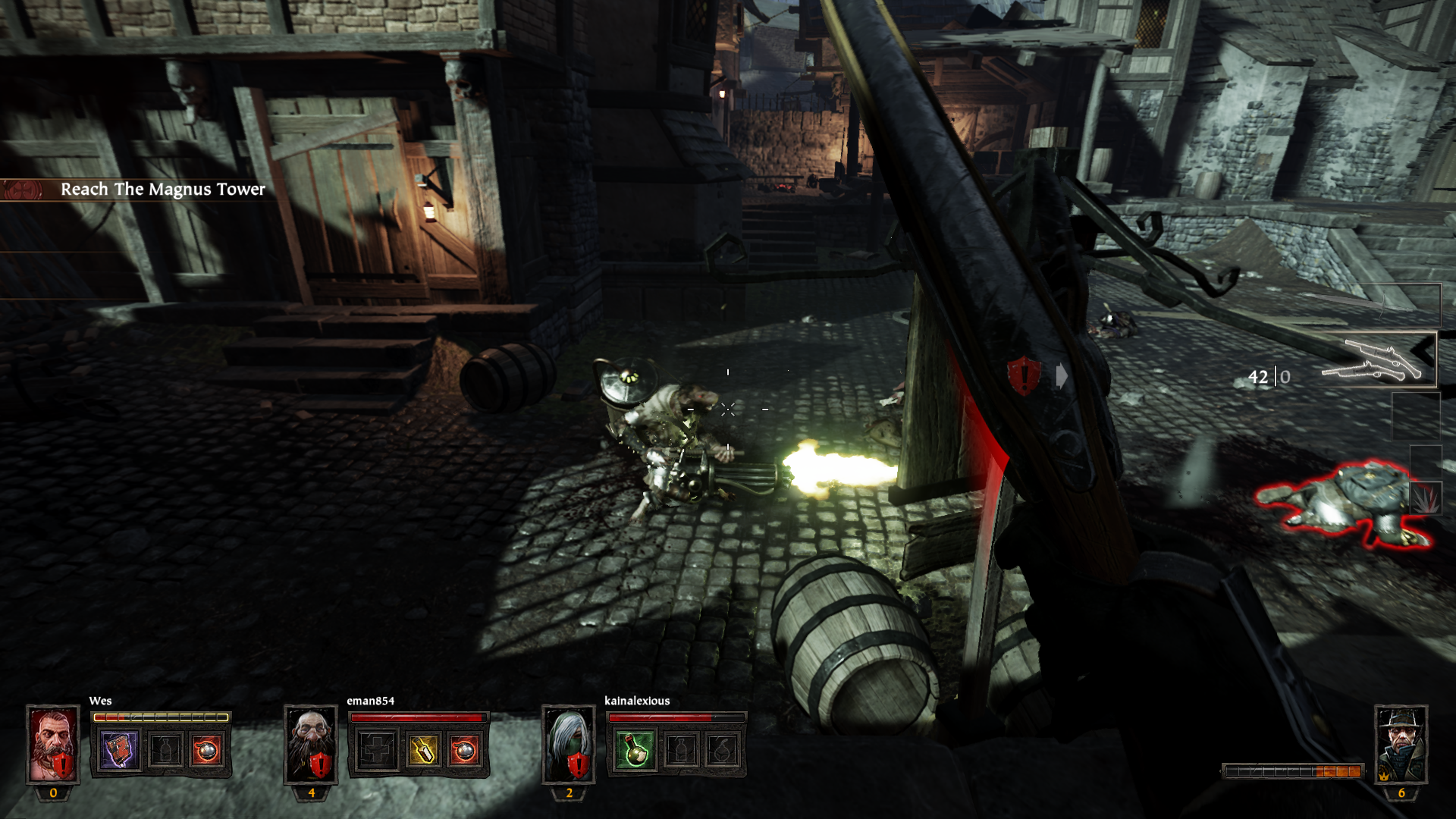 The Ratling gun is slow and inaccurate, but it lays out pain in straight lines. 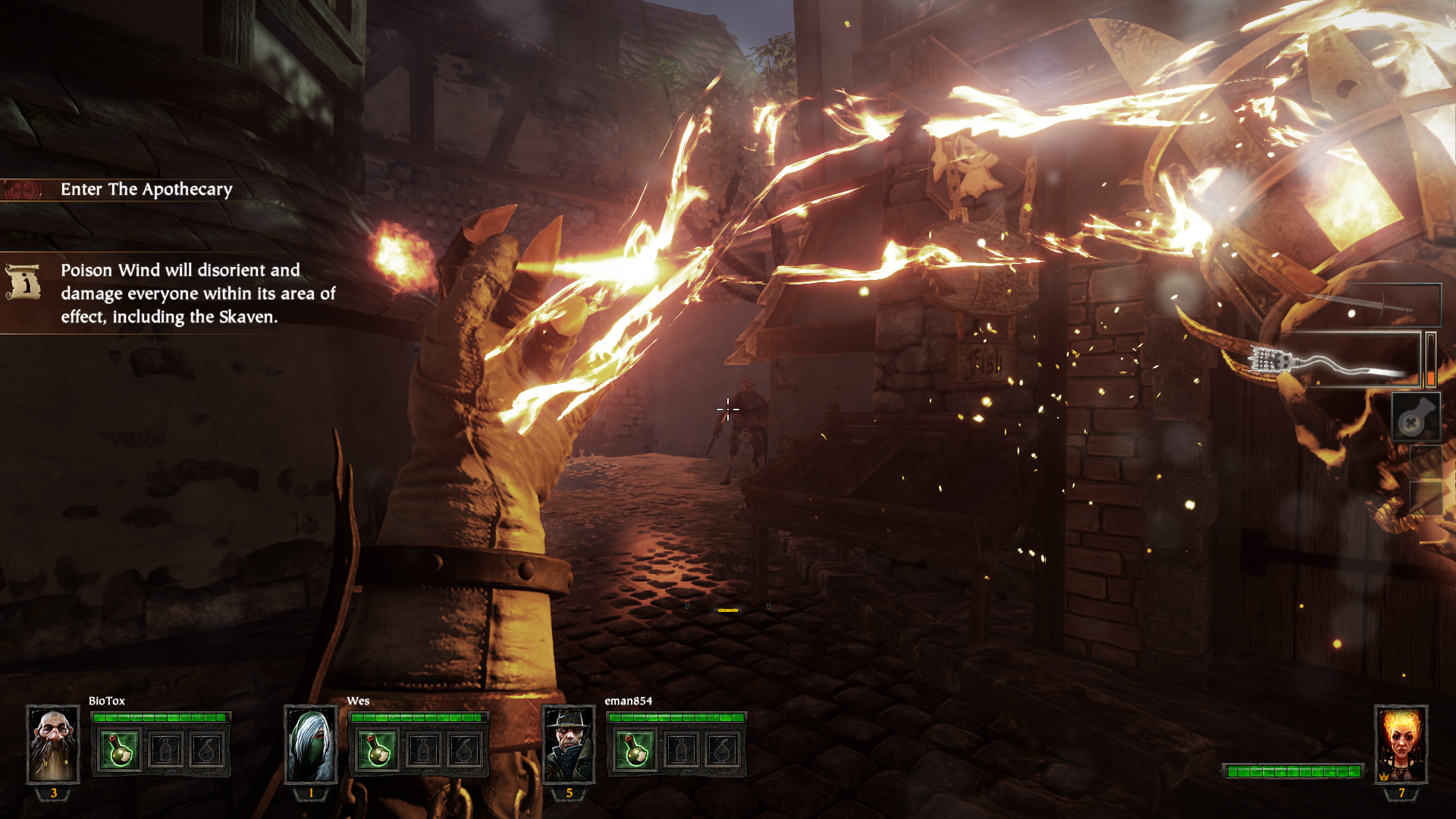 If you had particle and lighting effects this pretty, you would show off too. 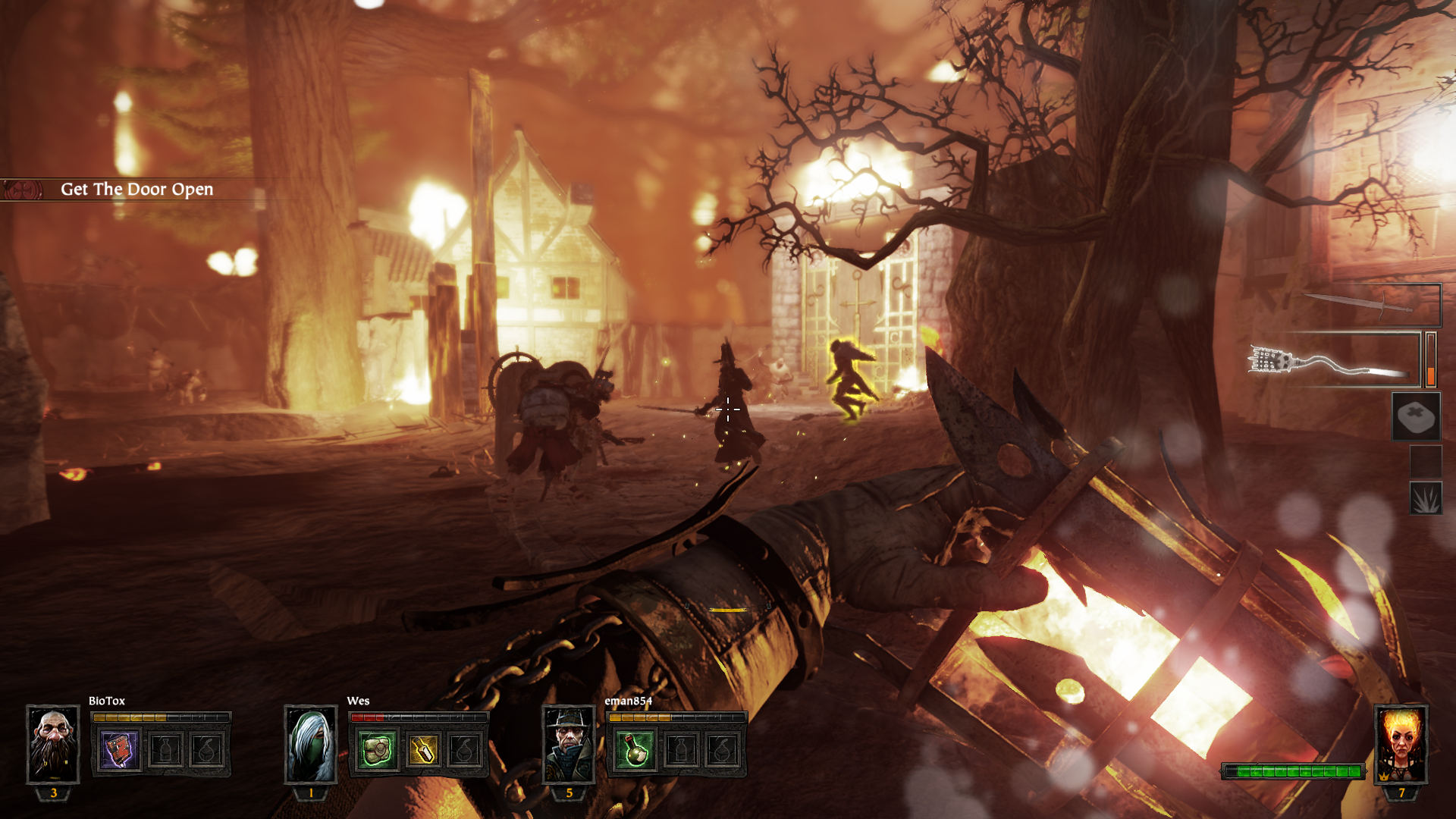 This place is burning down like it’s the end of the world.