The Nintendo 3DS boasts ‘3D without glasses’ – however, some of us wear glasses as a necessity. Will those of us with naturally poor eyesight miss out on the ‘full 3D effect’?

You Are Reading :Nintendo 3DS HandsOn Glassesless 3D with Glasses 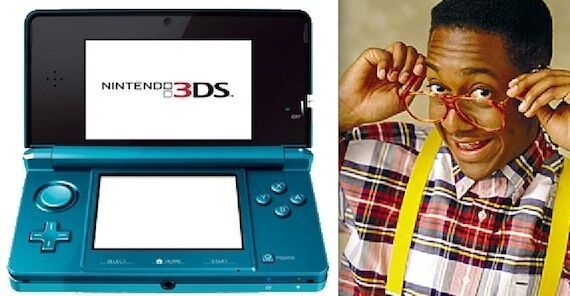 My name is Phillipe Bosher and I’m near-sighted. With a score of -2.5 units in both eyes, I wear glasses from the moment I wake up in the morning, to the moment I go to sleep at night. Once I take my glasses off, it’s like switching from a world of 1080p to one of 480i; sure, I can still see most things, but the further away that they get, the more they begin to lose clarity and focus. I’ve been wearing glasses for around eight years, and I treat them now as a necessity, rather than a whim.

When news about the Nintendo 3DS began to circulate, I noticed that the majority of “Hands-on Impressions” focused on the jaw-dropping nature of the 3D and the ‘sweet graphics,’ but I didn’t see any writers mentioning what it was like to play the system while wearing glasses. Sure, there were a few stories of people being completely unable to view the effect – but there weren’t any mentions of how glasses affected the 3D experience.

This was a little worrying. Since its initial showing at E3 2010 last year, I have been incredibly excited for the upcoming Nintendo handheld. Although some complained about the launch line-up, and others about the price, I’ve always been undeterred in my excitement. The only question that ever came to the forefront of my mind was: ‘Oh man… Do I want Aqua Blue or Cosmo Black?’

But the question always percolated in the back of my mind: while my eyesight isn’t terrible, it certainly isn’t the greatest — will the 3D effect be ruined for me? Sure, I don’t mind playing games in 2D – after all, I’ve been doing it all my life – but will I miss out on the single biggest hook for the system? When playing with the 3DS this past Saturday, the answer became was obvious:

It all started while playing The Legend of Zelda: Ocarina of Time 3D…

The Legend of Zelda: Ocarina of Time 3D

Regarded by many (including myself) to be one of the greatest video games ever made, the 3DS edition of the N64 classic had the worst 3D implementation at the event. Try as I might to find the ‘sweet spot’ on the 3D slider, it just would not happen. While wearing my glasses, it felt like I was horribly drunk. You know the feeling – your brain still thinks it’s functioning normally, but your eyes and body don’t quite respond as they should. Not only did my eyes begin to hurt, but my brain literally couldn’t make sense of what I was seeing. Having endured a confused double vision for well over a few minutes, I eventually switched the 3D off and played the game as it was originally designed.

Given the choice to explore either Kokiri Forest, the Deku Tree or to fight Gohma, I decided to take the middle option, and spent some time fighting skulltulas and exploring the dungeon. I found that keeping the game set to 2D kept the visuals crisp, clear, and ultimately better than that N64 original, but the moment the 3D was activated, the developer’s attempt to add realistic depth of field only served to make the background blurry – and duplicate the on-screen image. While wearing glasses, I tried ducking, weaving, and even tilting the device in order to find a place where I could easily experience the 3D effect. Unfortunately, unless the 3D was minimal, the game was entirely unplayable.

I then decided to take my glasses off and compare the difference. It was at that point that I almost “got it.” Finally, I could see the 3D effects, and the slider began to positively affect the environment, instead of simply furthering the distance between the two images of Link. However, in order to see the game clearly, I had my face less than six inches away from the screen, and my eyes began to strain incredibly quickly. So while I knew it worked, it wasn’t quite an optimal game-playing experience. This was a disappointing realization, especially as Ocarina of Time was one of my most anticipated launch-window titles.

During my session with the N64 classic, I was reminded that you could choose to aim the hookshot via the gyroscope sensor, by physically pointing the 3DS in a given direction, the in-game viewpoint would adjust accordingly. But, as many have said before, for the 3D effect to work correctly, you have to be a certain distance from the screen, in a certain position. The moment you start to tilt the device, the image on the screen begins to flicker, and it becomes reminiscent of an animated flip-pad: the faster you flipped the paper/tilted the device, the more ridiculous the animation looked. A problem even more prevalent in Super Monkey Ball 3DS.

As those who have played the series before will testify, the game requires a deft hand, and indeed a lot of patience, in order to succeed. With tilt-controls, 3D and Glasses on, I quickly began to feel seasick. Not only were there two AiAis on screen, but they were rolling obscenely fast in directions I didn’t recall sending them in.

Somewhere, there is a person who decided that motion-control on a 3D device was a good idea – unfortunately, it was a bad idea. As already mentioned, the 3D effect only works when you are at a certain distance and angle from the screen – so, as soon as you begin to tilt, it’s impossible to keep track of the action. The image flickers uncontrollably, and before you know it, you’ve fallen off the edge of a platform.

Once again, playing glasses-free helped a little, but the combination of extreme speed, 3D effects and tilting the device felt ludicrous. Eventually, I switched the 3D slider to “Off,” and allowed myself to play the game in a way that felt most natural. The game didn’t need the extra dimension and suffered from its hasty implementation as a result. Although turning the 3D off fixed the image-flicker problem, the hook of the 3DS is its “glasses-less 3D experience.” Why do I have to switch to 2D in order to make the game functional? It felt like the 3D was entirely unnecessary – something that was also mentioned by our own Christian Spicer in his Super Street Fighter IV 3D Edition hands-on preview.

Even after switching to 2D, I felt the gyroscope controls were expendable. I’m usually an advocate of motion gaming – if it works, who cares? – but the Super Monkey Ball 3DS tilt system just didn’t seem to work as well as it should. Again, AiAi seemed to pick up speed far too fast, and so I found myself resorting to the Circle pad. While I don’t mind doing so, surely the developers could have tried ensuring the motion-control was up to par?

If you think that I’m sounding pretty negative so far, then you’re probably right. I went in with high-hopes and, so far, they’d all been dashed. While I expected problems with the 3D effects, I didn’t expect them to be so blatantly obvious. In order to give the 3DS another chance, I thought I’d play Nintendogs + Cats — surely the mainstream first-party title confirmed for launch would have a good implementation of 3D?

To my pleasant surprise, it did. My eyes and brain felt weary by this point, but the 3D effect was noticeable and surprisingly immersive. Even while wearing glasses, I could see the 3D, and playing with the 3D slider actually served to strengthen the experience, not weaken it. While the game itself didn’t seem to stand up under scrutiny — it seemed like the NintenCats were simply re-skinned NintenDogs – it was mildly reassuring to see that there was a title that worked in 3D. As I called the dog to the forefront of the screen, the 3D effect held up incredibly well, and it seemed like there may be a little hope for glasses-wearers.

That being said, the backgrounds in Nintendogs + Cats were bland. In every other game I played, the backgrounds were busy and full of detail – was this why the 3D worked in Nintendogs + Cats? Because it was less confusing for my bespectacled eyes to understand? Or was it that the developers spent more time honing the 3D experience, and thus it was an example of a well-implemented 3D effect? I certainly hope it’s the latter.

While at the event, I had the chance to play many more games, including Resident Evil: The Mercenaries 3D, Ridge Racer 3D and even some of the cool Augmented Reality experiences. However, in all the games I played, the 3D experience fit into the three categories described above. From the atrocious to the unnecessary to the reasonably well-implemented, I came away feeling sorely disappointed, and sadly uninterested in the system’s launch lineup. Whereas before I could stay staunch in the belief that “3D would make all the experiences better,” I soon came to realize that, unless I wanted to keep my glasses off and stay five inches away from the screen at all times, it probably wasn’t worth buying the 3DS at launch.

Perhaps my skepticism is because I’m finally in the minority who have been excommunicated by video game gimmicks. The Wii introduced a world of motion gaming and, in doing so, rendered a certain set of disabled people unable to play its games – a problem exacerbated by the Move and Kinect. There was a small outcry when it emerged that video games were moving towards more motion-controlled experiences and, now that 3D experiences are beginning to instill themselves in our culture, I have to wonder: am I now the odd one out? Or is it that Nintendo has gone one step too far, and installed a feature that is inherently faulty?

I guess we won’t know until March 27th, 2011. Until then, let us know your thoughts in the comments below.

The Nintendo 3DS is due to release March 25th in Europe, and March 27th in North America.