Hearthstone’s latest Old God will bring back your Deathrattle minions

Hearthstone’s latest Old God will bring back your Deathrattle minions

You Are Reading :Hearthstone’s latest Old God will bring back your Deathrattle minions 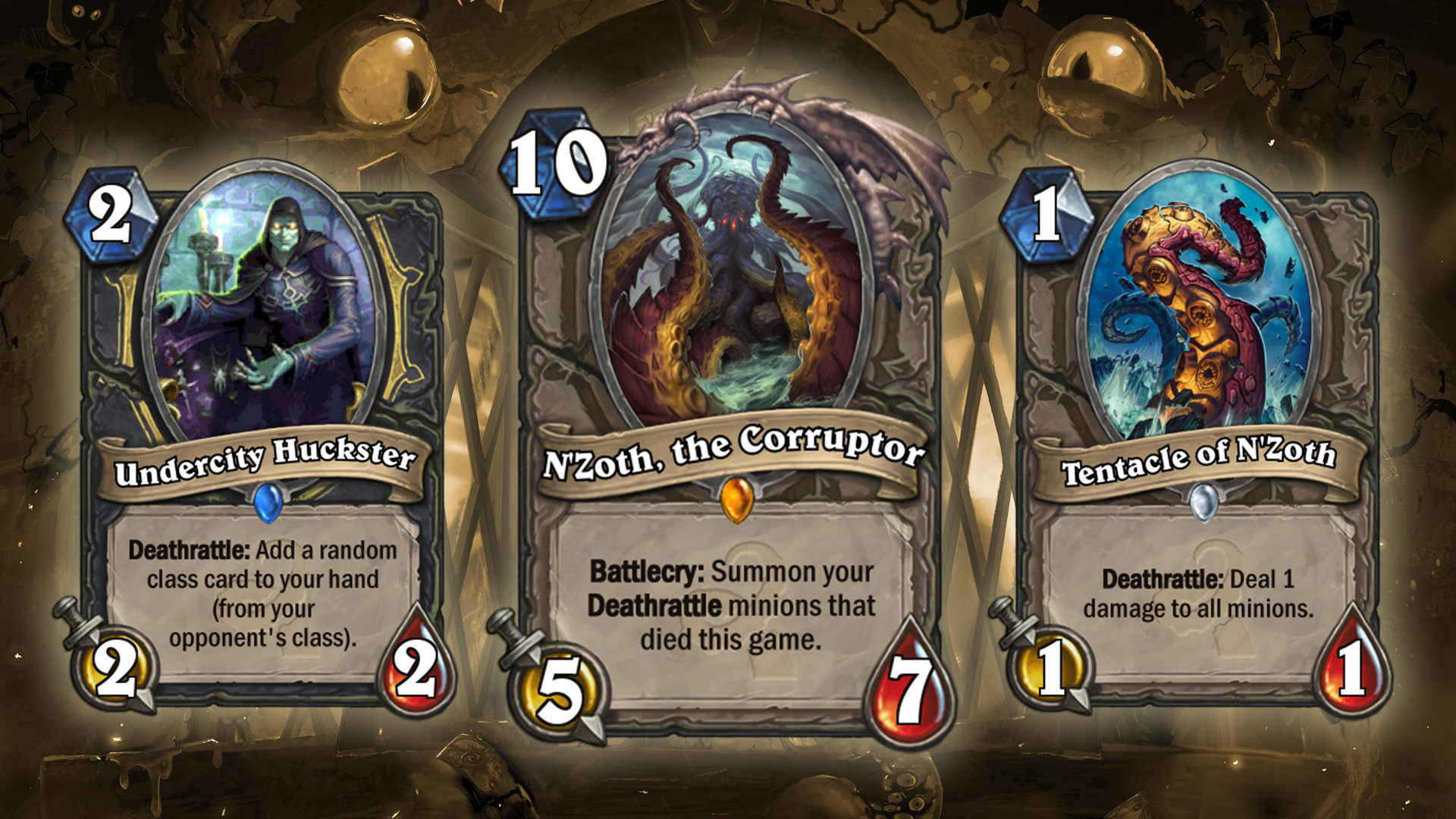 With a new card from Hearthstone’s Whispers of the Old Gods expansion being revealed almost every day, and over 100 still to go, I decided to hold off analysis until seeing more of the set. But it’s worth making an exception for each of the Old Gods themselves, as they already seem like the most exciting new cards. The first god to be shown was C’Thun, which every player will get for free. Today Blizzard filled us in on what to expect from N’Zoth, the second of the set’s ancient evils, which won’t be free, but does seem badass.

Like C’Thun, N’Zoth is another 10-mana Legendary, and the kind of card players will want to build an entire deck around. His Battlecry effect summons back any of your minions with Deathrattle which died earlier in the game. But what happens if space on the board is limited? Perhaps unsurprisingly, that’s where RNG comes in. Here’s the explanation from the official Hearthstone Twitter account…

[email protected] N’Zoth embraces chaos, so the resurrected Deathrattle minions will be random.March 24, 2016

Which is bad news if you get a Loot Hoarder instead of your Cairne Bloodhoof. As for how powerful this actually is as an effect, that’s likely to depend on what format you’re playing. A lot of the game’s most powerful Deathrattle cards—like Sludge Belcher, Voidcaller and Piloted Shredder—will be rotating out when Goblins vs Gnomes and The Curse of Naxxramas sets are removed from the Standard format.

Of course Blizzard may still choose to include some strong Deathrattles in Whispers of the Old Gods. You can see two new ones flanking N’Zoth at the top of this page. Undercity Huckster is a Rogue card with a built-in Burgle effect as its Deathrattle, whilst N’Zoth’s Tentacle is a neutral card that effectively replaces Explosive Sheep as an anti-aggro tech card. I imagine the designers are going to be operating with caution when it comes to Deathrattles, given how ubiquitous “sticky” minions became. Nonetheless, I could see a Paladin Deathrattle deck that runs N’Zoth alongside Tirion and Sylvanas being a thing.

Where it’s really going to be nuts, though, is in Wild, where there are no restrictions on which cards players can pick. With all the Deathrattle creatures still valid, N’Zoth becomes a potentially super-powerful play, creating a board that would be very resistant to AoE spells. Imagine a Renolock getting to turn 10 and being able to summon Sylvanas, Feugen, Stalaag and a Sludge Belcher. Gross!

That said, it’s worth noting that we’ve been excited about cards like this before. Kel’Thuzad resummons all friendly minions that died that turn, while Varian Wrynn draws three cards from your deck, and if they’re minions puts them on the board. In both cases the effect was either too tricky to set up, or too inconsistent in terms of what you got. But with N’Zoth, the set up is fairly simple and you have some control over what gets summoned, because you know which of your Deathrattle creatures have died.

We’ll see how strong N’Zoth really looks once we know what’s in the rest of the set, but for now it certainly seems fun. There are two more Old Gods still to be revealed—Yogg-Saron and Y’Shaarj—which it’s safe to say will also be 10-mana cards with more tentacles and eyes than are strictly necessary. I for one welcome and our new insanity-inducing overlords and will be changing my name to C’lark accordingly.