Fortnite: The Story of Season 9, the Giant Robot, and the Polar Peak Monster

The story of Fortnite Season 9 is Epic’s most complex narrative yet, so here’s a summary detailing Singularity, the giant robot, and the Polar Peak monster.

You Are Reading :Fortnite The Story of Season 9 the Giant Robot and the Polar Peak Monster 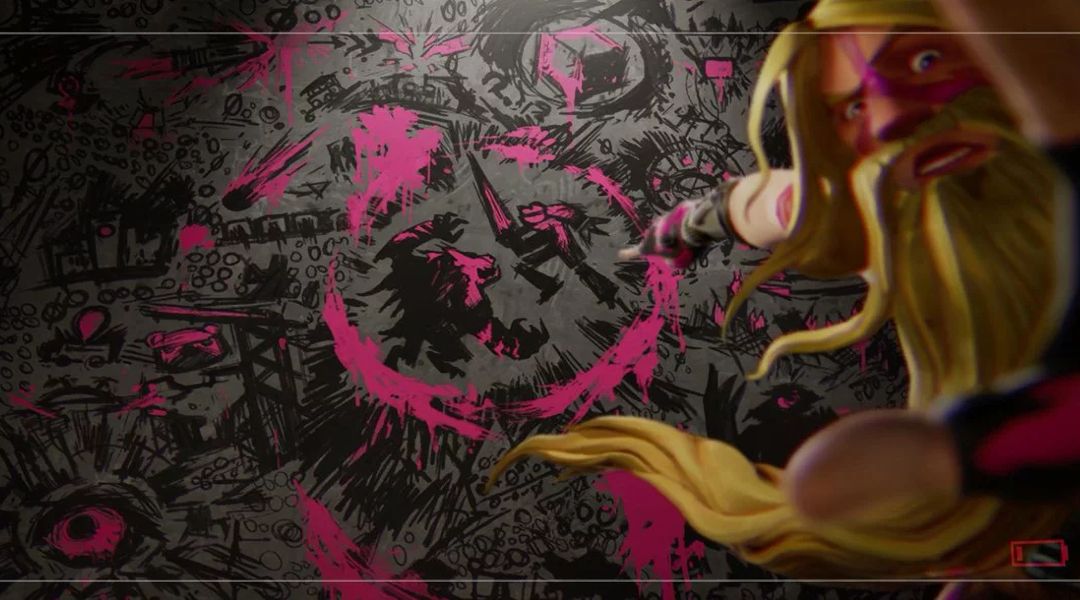 The final week of Season 9 in Fortnite’s battle royale mode has arrived, and with it comes map changes with large implications. Fortnite players will likely have noticed that the giant pink robot being built within Pressure Plant is now complete, and the robot itself is made of five themed sections based on Fortnite skins, including Cuddle Team Leader, Rex, Tomatohead, Beef Boss, and Drift. The ties to the Singularity skin, and its styles, are obvious here, and Fortnite’s Season 9 story is finally coming together.

The 10-week journey to this point has told quite the story, but it wouldn’t be a surprise if most Fortnite players either missed the details or forgot what’s happened along the way. But with Season 10 arriving soon, familiarity with the giant pink robot, the Singularity skin, and the mysterious creature branded the Polar Peak monster is more important than ever. Here’s a summary of the Season 9 story so far.

Season 7 of Fortnite introduced the Ice King and his domain of ice and snow, an entirely new section of the map that floated all the way to Fortnite’s southwestern map corner. The secrets within this snowy region remain pertinent even now, and Season 8 escalated Fortnite’s seasonal events in a big way. The prisoner released from the melting ice within the Ice King’s castle raised a volcano, while a mysterious government agency discovered a vault beneath Leaky Lake. Note that within this vault was a helmet that will be important later.

It’s these two warring elements, the secrets of the Ice King’s mountain and the now active volcano, that serve as the foundation for Season 9’s story. Either Epic has been planning a multi-season storyline for a while, or it’s just doing its best with what story is available. Either way, it makes for an exciting plot that has now been ongoing for nine months. 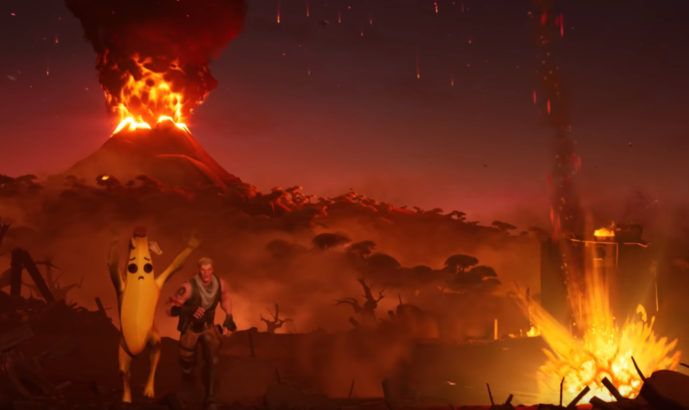 Season 9 of Fortnite began with a literal bang. The volcano that had grown from Season 8 burst, raining chaos across the map. In the process, the Tilted Towers and Retail Row regions of the map were destroyed. Even more important was a third location hit by the volcano’s debris: the icy mountain upon which Polar Peak sits was struck, cracking the cliff face.

The events of the Season 9 cinematic trailer also play a key role going forward. Characters Jonesy and Peely rushed into a bunker to get away from the volcano’s damage, and they stayed there for an unspecified amount of time. When Jonesy came out of the bunker, he’d eaten Peely and was covered in paint. The paint is noteworthy, but doesn’t make sense just yet.

Outside of the bunker, Tilted Towers had become Neo Tilted, and Retail Row was replaced with Mega Mall. Powered “Air Stream” structures had been built, as had a giant cable leading away from the vault to Neo Tilted. Meanwhile, the volcano had become dormant, and a Power Plant was built in its crater. The future had arrived.

The first major event of Season 9 took several weeks to come to fruition. After two weeks, the ice near where the volcano’s blast hit Polar Peak’s mountain began to melt. At first, just a sheet of ice could be seen, but after another week, a giant eye behind the ice was revealed. It took another week before catastrophe struck, as Polar Peak’s castle disappeared and the cliffside where the giant monster had been crumpled. The beast had escaped its icy prison.

Giant three-toed footsteps leading away from Polar, and toward the water surrounding the island, were then discovered. Keen-eyed Fortnite players began to see the Polar Peak castle moving out in the water as the monster swam around the island. Over the next several weeks, the monster’s footsteps started appearing inland on the Fortnite map, and the giant left destruction in its wake as it moved further in. Its destination appeared to be the vault beneath the remnants of Loot Lake.

To note, up until now, players have only seen the giant eye and the giant footsteps. The monster itself has remained unseen, but that’s unlikely to last with the start of Season 10.

Starting in Week 7 of Season 9, a footprint from the Polar Peak monster appeared near the vault where Loot Lake used to be, and the next phase of the event began. The Power Plant atop the volcano transformed into a huge facility that looked like it could hide a rocket silo beneath it. What it was for, however, wasn’t missiles, and, in Week 8, it was discovered that pieces of a giant robot were being constructed here. Humanity’s response to the giant monster was to build a giant robot.

Week 8 introduced the robot’s feet and one leg, and Week 9 built the robot up through its torso. Week 10 finished construction, adding arms and a bear’s head, and it also stylized the robot’s appendages after Fortnite skins. The giant robot had become a Power Rangers or Voltron-style amalgamation, and all that was left was for it to receive its pilot and meet the Polar Peak monster in battle.

Here’s where the timeline resets. The escape of the Polar Peak monster and the robot’s construction can be seen as one half of the ongoing story, a half that’s being told without any player participation. The second half, however, involves players, as they participate in an ongoing Season 9 Battle Pass challenges to acquire Fortbyte collectibles and unlock new customizations. Namely, players are looking to unlock the Singularity skins and styles.

Singularity is revealed to be a hero or leader of the new civilization in Fortnite Season 9. There’s a statue of her built at the front of Neo Tilted, where you can see that her helmet is the same as the one found within the vault at the end of Season 8. Earning the Singularity skin is no easy matter, as it requires players to find and complete 90 Fortbyte challenges. With Fortbyte challenges being released in groups each week, earning 90 wasn’t even possible until the start of Week 9.

Essentially, Fortnite players with the Battle Pass at the start of Season 9 saw the Singularity skin and began collecting Fortbytes as they were able to. This occurred before the story of Fortnite Season 9 really began to unfold, and acquiring Fortbytes started unlocking pieces of a secret image that assembled like a puzzle. As the secret picture was unveiled, players saw it was a foretelling of the events of Season 9, which was painted on the walls of the bunker by Jonesy. The painting also revealed just how great of a threat the monster will become.

By participating in the Battle Pass, players are moving the story forward at a natural pace. They’re seeing the monster break out of the ice while also learning that it will become a major threat. They’re unlocking the Singularity skin while simultaneously realizing that she’s the hero they need. And then there’s the final touch, with Epic unlocking five styles for the Singularity skin for players to discover: the Cuddle Team Leader, Rex, Tomatohead, Beef Boss, and Drift styles.

Singularity, it appears, will pilot the giant robot against the Polar Peak monster to stop it from attacking the vault and taking power away from Neo Tilted. Players have been helping reach this conclusion the entire season long and may never have even realized it. 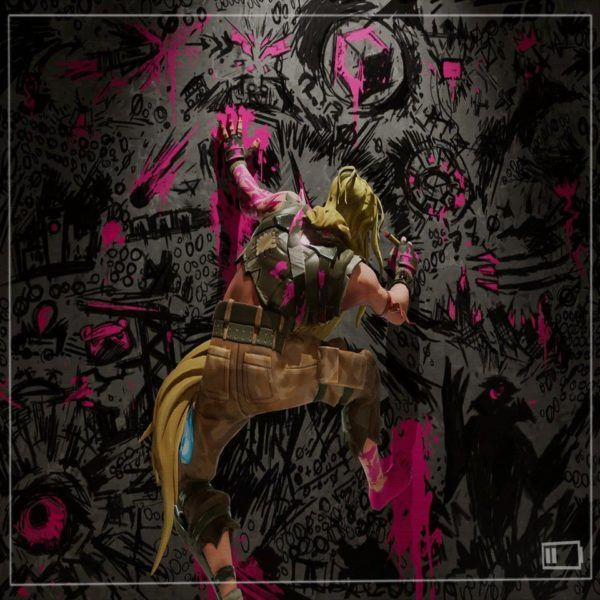 There is one final detail to mention, as a leaked loading screen appears to offer a look at the completed Fortbyte image. In this image, the giant robot and what can be assumed to be the Polar Peak monster are fighting. However, the giant robot has a huge sword in their hands. No sword of such size has yet to be seen in-game, but there once was a certain Infinity Sword put into the Vault for being too “overpowered.”

The start of Season 10 in Fortnite can be predicted to some extent. The giant robot and the Polar Peak monster will fight. The fate of the vault and Neo Tilted is at stake, but the victor remains to be seen. If past seasons are any indication, the face of Fortnite’s map will be forever changed as a result of the struggle. It’s going to be a lot of fun to see what Epic comes up with next.