Smile should have been a really good episode. Honestly, the potential was there. Here’s why: the Doctor and Bill are transported to a distant future (a normal scenario, granted) where they discover caretaker robots of a not-so-mysteriously empty colony (more on that in a bit) have gone haywire, instructing nano-robot swarms to kill anyone who doesn’t smile. And no, that’s not a massive spoiler. Because it happens in the first minute of the episode, leaving you completely clued up. No intrigue left whatsoever, no sense of mystery when the Doctor and Bill first arrive and find no-one to greet them. But you think “Hey, maybe there’s more to it than we assume”. No. There isn’t, actually.

You Are Reading :Doctor Who S1002 review A quirky idea that never reaches its full potential

After giving away the reason for the empty colony in the first two minutes, the episode starts in the TARDIS. Pearl Mackie’s Bill is asking some refreshingly common-sense questions, apparently unperturbed by the whole ‘spaceship’ thing. Mackie’s unflustered demeanor is a welcome change from the dangerous potential overdose of wide-eyed wonder some companions initially have. But the Doctor isn’t enjoying Bill’s nonchalance particularly, and does his best to claw back some fascination from her. Capaldi shows just how much the Doctor enjoys these revelatory moments by demonstrating that when he doesn’t get them, a bit of a petulant streak emerges. It’s oddly endearing. 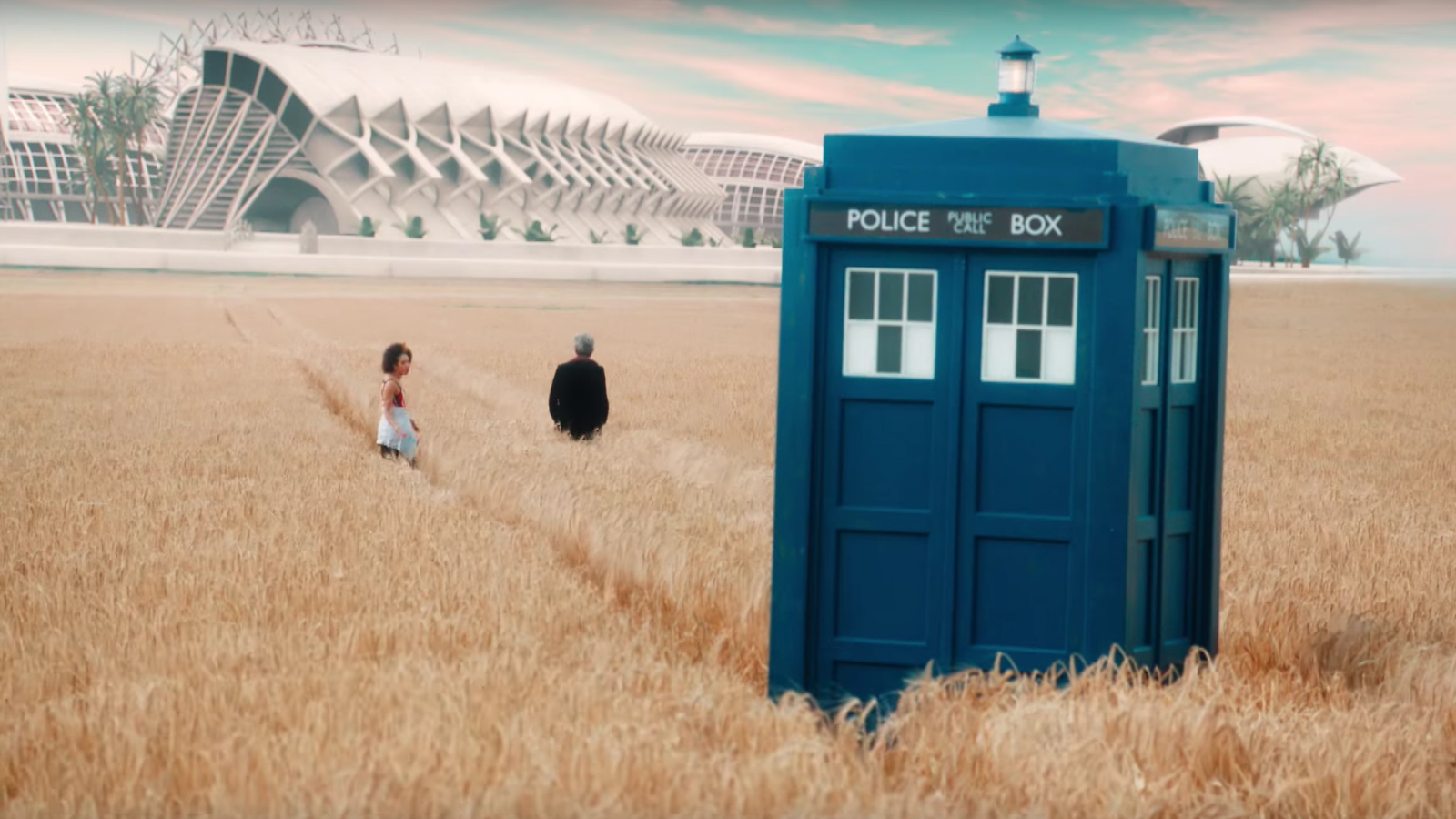 Then Nardole enters, reprimanding the Time Lord for travelling in his TARDIS when he took an oath (serious word time) to stay on earth. Why has he sworn not to travel anymore? And why has he also promised to protect that enigmatic vault? Here’s a spoiler: these massively interesting plot points are completely ignored. It’ll come as no surprise that he can’t stick to either of them. Off he and Bill go to the future, ready for their second adventure. Unfortunately this one detail confirms that although the entire episode has the potential for character development and some truly interesting insights into the Doctor’s psyche, it’s sacrificed for the sake of a quirky idea that never reaches its full potential.

An empty, sleek building awaits. One rotund little robot toddles over to greet the Doctor and Bill, gifting them with nifty little yellow discs. Holding them in their hand, an emoji pops up on one side. Sounds silly at first, but you soon realise that these emojis correspond to what you’re feeling (and no, there’s no poop emoji option). But they’re double-sided. Meaning that when you turn it over to try and see what emotion you’re feeling, the emoji flicks to the other side. Neat. So only the robots tottering around the facility can see how you truly feel… 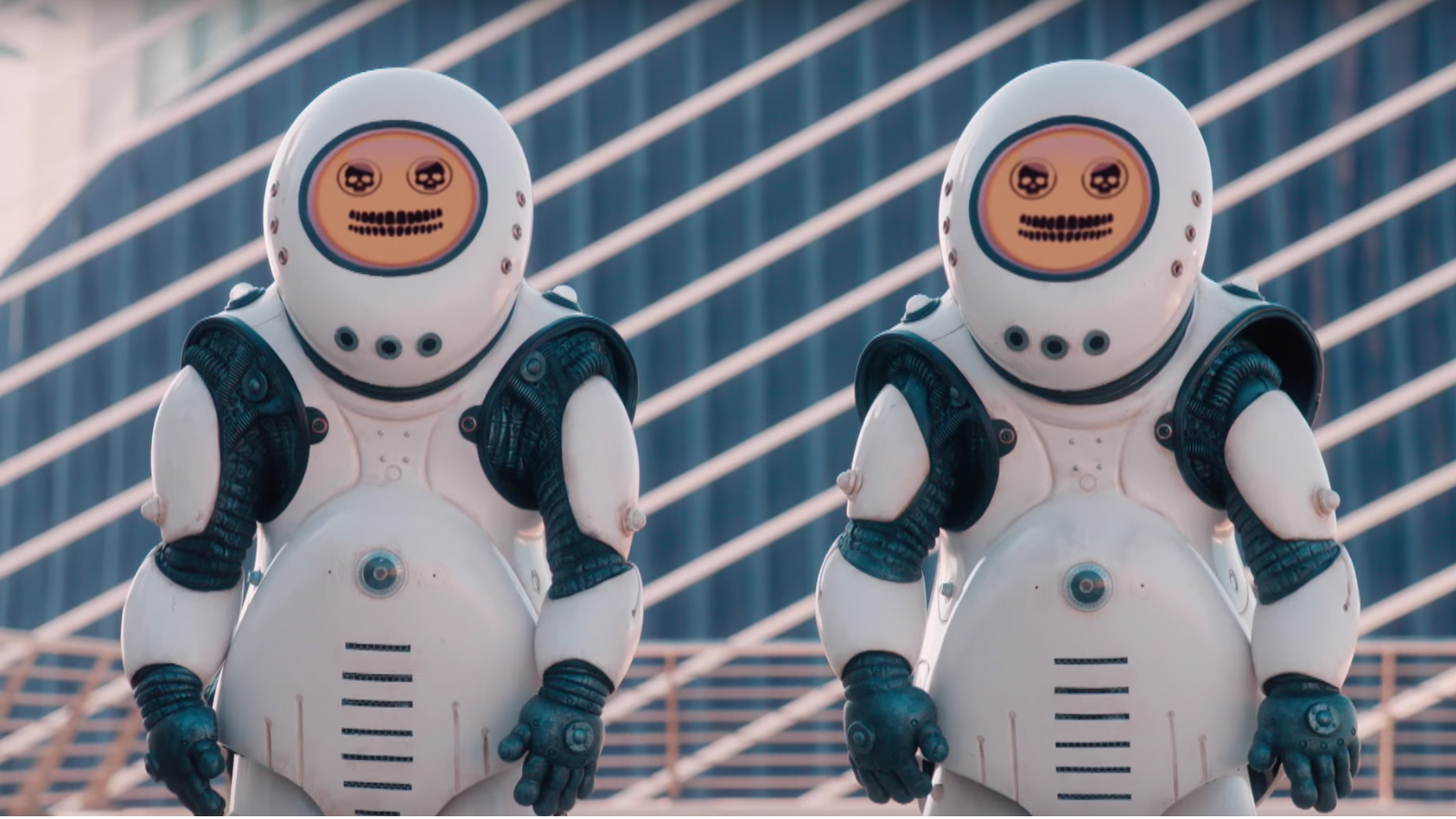 Putting them on their chests, the discs swivel to the Doctor and Bill’s backs. In a clever reversal of the usual walking-behind-someone-to-show-submission behaviour, it means the robots who trail behind them can see exactly what the pair are thinking. “I see where this is going”, you think to yourself. “They’ll have to act happy all the while when they’re discovering what happened to the people, and eventually they’ll break when they’re faced with all the robot murder”. Nope. The emoji discs mainly interrupt the flow of the episode by unnecessarily flicking back to what they’re displaying when we know the Doctor is angry, and we know Bill is sad.

Now the Doctor and Bill have finally figured out where the colonists are (they’ve been turned into fertiliser dust), it’s time to solve the problem. By blowing up the entire building. Okay. Fine. The exchange between the Doctor and Bill when they get to the TARDIS underlines how passionate the Doctor is about helping, with Capaldi showing how frustrating the Doctor seems to find his own drive to save people. Barking at Bill “Don’t sentimentalise me!” was an on-point reaction to her heavy-handed over-explaining about how accurate the ‘assistance and advice’ panel on the TARDIS is. 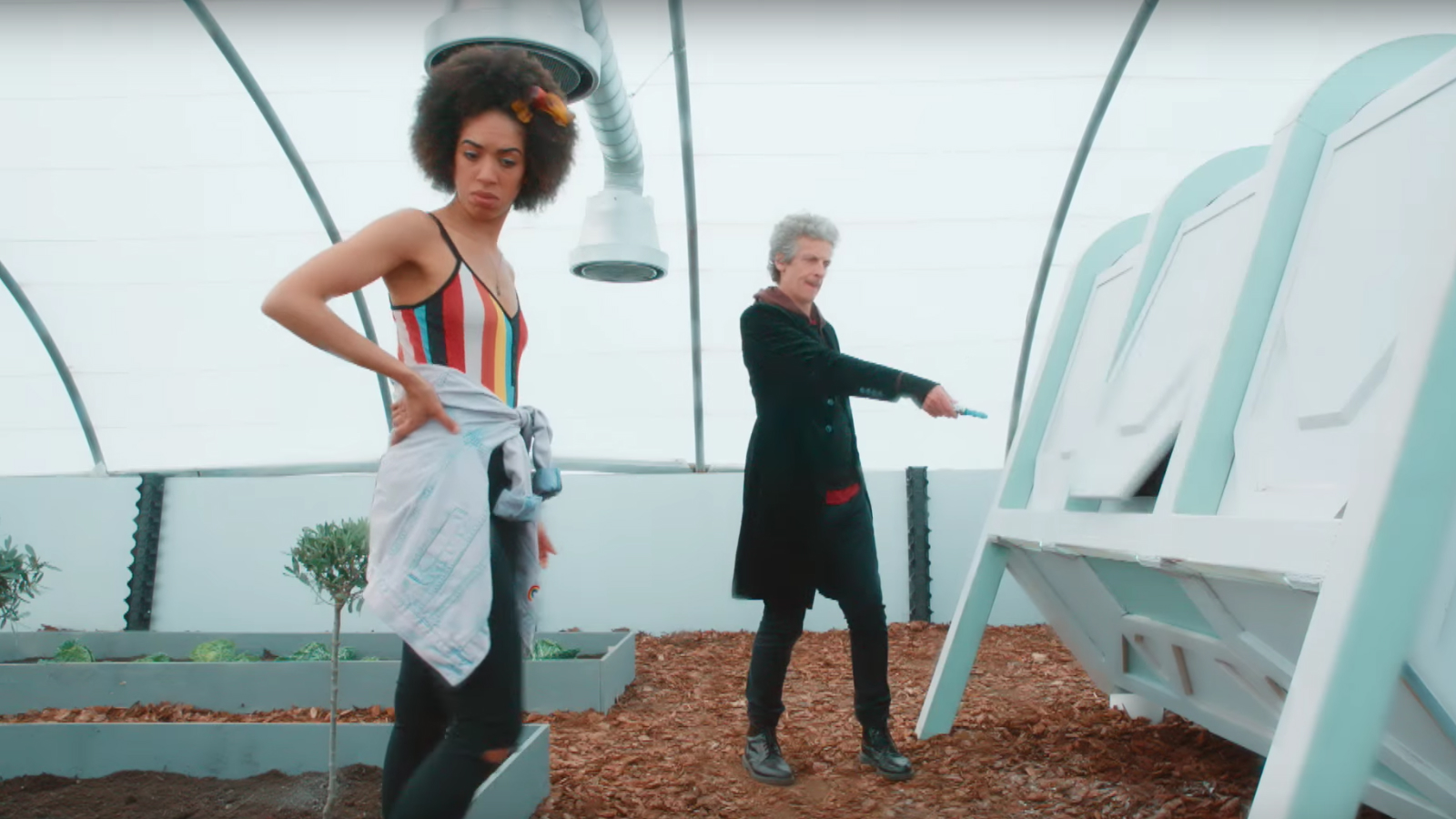 The problem is that the episode can’t decide whether it wants to figure out why people who don’t smile were murdered, or focus on action sequences about emoji robots and their floating swarms of killer nano-robots. Pick one and stick to it. Making their way to the engine room to blow up the core of the building, they don’t see a part of the wall detach and turn into a swarm of the nano-robots. But you do. So when later on the Doctor ‘reveals’ that the building itself is made out of the robots, you’re left saying “Yeah, so what?”. You’re often one step ahead of the Doctor and Bill, making the significant reveals of the episode redundant.

However, the nano-robots’ bending, twisting mid-air movements are like a starling murmur, looking absolutely stunning in the process. Bringing you swiftly back down to earth, on the way to the engine room Bill runs into a woman lying in state, dead. The screen at her feet displays a concise history of humanity, showing how everything went to shit – hence why the colonists have moved to this different planet. Mackie’s eyes tear up, her broken voice confronting the Doctor with what happened to the human race. For a moment it really looks like she’s going to lose it, as the realisation that millions are doing to die in the future is overwhelming to say the least. One minute of outstanding acting from Mackie, then she pushes onwards, wiping her cheek. She doesn’t mention to the Doctor how much it bothered her, frustratingly. 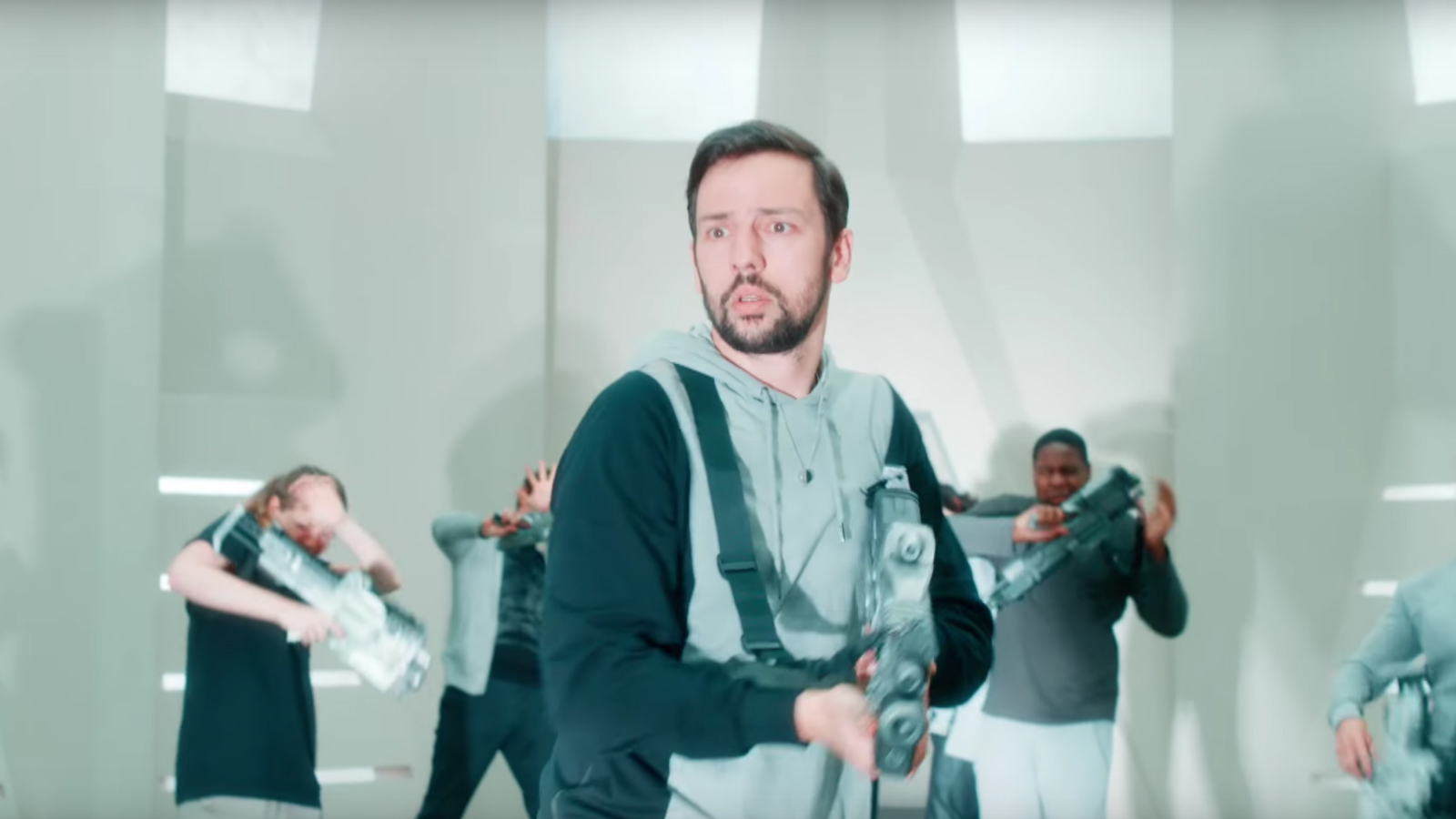 Running into a boy wandering the corridors, she brings him to the Doctor, which triggers the realisation that there are hundreds of cryogenically frozen colonists in the building so they can’t blow it up, really. The first colonist to wake up has an entirely sensible reaction to finding out the caretaker robots have gone psycho: guns. Lots of guns. Oh, but that little boy has gone missing, which Bill somehow didn’t notice. In a rushed sequence the robots now have the boy as a hostage, and the colonists want to kill them. But the Doctor doesn’t let them. He’s suddenly realised that the robots changed their definition of happy because someone’s mother died. For some reason they weren’t programmed with a knowledge of death (seriously?) so when people begun to get sad, they thought it was a virus and so, rather ironically, killed them. To be honest, the explanation was pretty confusing. Apparently all this means the robots are sentient, and deserve to live. It’s all explained far too quickly, leaving you a bit bewildered by the time the Doctor is doing his spin-around-and-gasp-with-realisation moment.

One quick buzz of the sonic screwdriver and the robots are all fixed. Good. Now they can live in peace with the humans. No, wait – because the building is built out of nanorobots the Doctor decides that the robots are the indigenous species, and the humans now need to convince the robots to let them stay. Oh, and the Time Lord suggests that the robots should charge rent. What the hell, Doctor?! What happened to wanting to help the colonists?